Modern Combat 5 in One Minute

Gameloft's award winning FPS Modern Combat 5: Blackout has continued to grow and evolve since it first landed in stores. This is thanks to its sheer volume of single and multiplayer content. It is also a feature of the competitive esports scene, in conjunction with the ESL, ensuring its multiplayer community is more engaged than ever. Find out why in Modern Combat 5 in One Minute!

Read more about Modern Combat 5 or watch other games in one minute.

Modern Combat 5: Blackout is Gameloft's fast-paced military FPS. It is the complete package, with a single player Campaign and Spec Ops missions complimented by active Multiplayer and esports communities. The action is always fast and frantic - just like this video.

Featuring an expansive single player campaign and a competitive multiplayer scene, this provides a complete shooter experience on mobile.

Take on the solo story mode as Cayden Phoenix, a member of Gilman Security. You must travel the globe - from Venice to Tokyo - to uncover the truth behind a series of attacks. It is a thrilling tale, with peaks and twists that leave you feeling like you have just been on an intense roller-coaster.

But it is the multiplayer that has really kept the Modern Combat 5 community buzzing since its release. Battle alone or form a squad with other players around the world as you battle for supremacy across the game's multiple modes and maps. 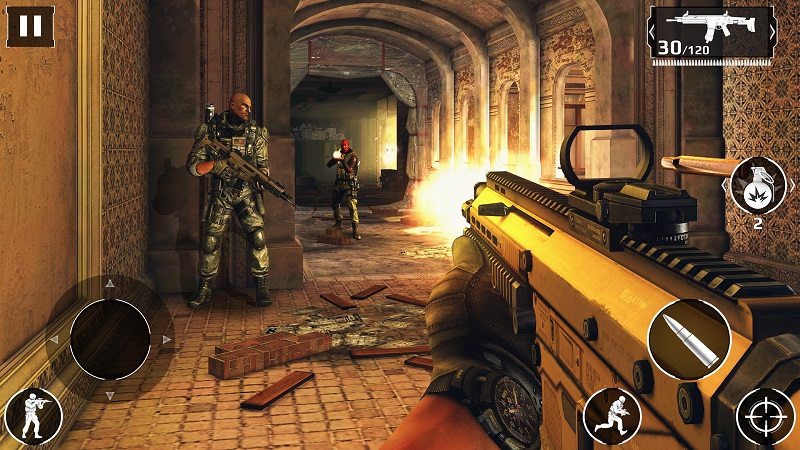 When tackling the PVP you must choose a class to suit your style. There are seven of these diverse warriors. These include the Recon, Sapper, and Morph - all of whom have their own unique skills.

Fight in eight modes across eight maps as you win and gain XP. Collect parts to construct more than fifty weapons, then add customizations to suit your play style.

So, lock and load soldier, it is time to play.