This December in New York, Amazon is hosting an incredible gaming event. Running from the first of the month to the third, a team of top YouTubers are going to be taking part in the Amazon Champion's of Fire event.

It is a huge eSport tournament, with a top prize of $50,000. But the twist is that all of the game’s being played are the best casual mobile titles. Each of these will test the competitors' skills and reactions. And Gameloft’s hilarious runner, Minion Rush, is part of the event.

Who'll be an Amazon Champion

Taking place at the Time Inc. Studio in New York City from December 1st to December 3rd, the Amazon Champion’s of Fire tournament is designed to test YouTube celebrities in order to discover who is the greatest mobile gamer. Minion Rush is going to push these competitors to the max, as they take on a special Time Limited Event.

Gaming celebrities like Swiftor, NampaiKid and Mystic7 will face off in some of the top casual mobile games, including Flappy Bird Family, Pac-Man 256, Sonic Forces: Speed Battle and Real Racing 3, for their share of the $50,000 prize pool. Learn more at www.championsoffire.com

We aren’t going to make this easy though. To ensure that we really give these players a run for their money, the Minion Rush team are unleashing a never before seen event for the Fire tournament - and it is only available on Amazon devices.

These brave YouTubers must enter the new Prison location. Here they must don the Prisoner costume and try to collect as many bananas as possible in just three minutes. If they can beat their opponent's score in this tense banana face-off, then they will be one step closer to the $50,000 prize.

You can keep up with all of the news on the Amazon Champions of Fire event by heading over to its official site, or the Amazon Facebook and Twitter pages where you can see all the latest with the hashtag #AmazonCOF. 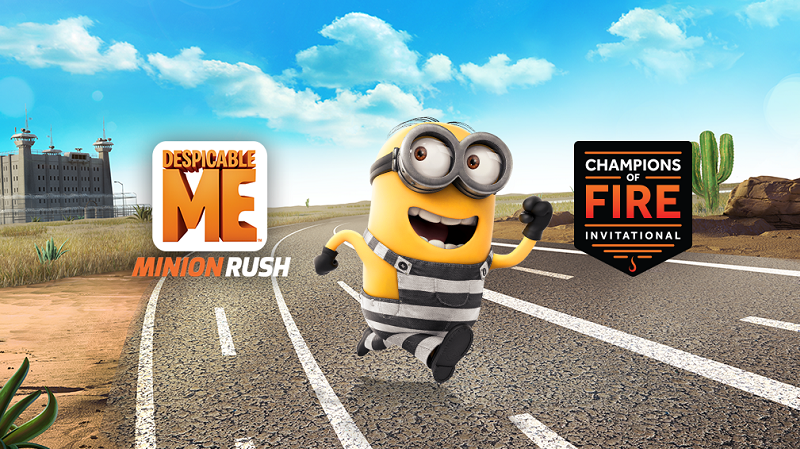 If you want to see the action unfold, then you can catch all of the event on Twitch where it will be streamed live. Players in America can also catch up with the highlights on the CBS Sport Network.

For the duration of this three day event, Amazon players can also join in on the action. To do this, select “Races and Events” from the Main Menu and then select "Amazon Champion of Fire" event. Can you beat the YouTubers?