March of Empires: Rewriting History Together

March of Empires is a massively multiplayer online strategy game that immerses players into a fantastical medieval world full of huge battles and endless warfare!

Players must choose between three factions—Kings, Tsars, and Sultans—and build their armies with the help of others around the world to become the ruler of the realm.

Released by Gameloft Sofia in August 2015, March of Empires is a historically-inspired game that relies heavily on creating strong ties and alliances with other players.

It also requires a lot of time and dedication to amass a big enough army to conquer the other factions. But when players aren’t fighting each other, there’s always someone else to battle, like samurais and Vikings!

Speaking of Vikings, one of the most unique parts of March of Empires are its recreations of history’s most epic battles. They aren’t just retellings though—they give players the opportunity to rewrite history!

The first campaign was dedicated to the Viking raids of the British Isles where players could choose to support Halfdan Ragnarsson, commander of the Great Heathen Army, or Alfred the Great, King of the Anglo-Saxons.

Into the Minds of Halfdan and Alfred

In preparation for “The Invasion of the Great Heathen Army,” the game team and Arman Mohazzabfar, Narrative Designer, hit the history books. They did a lot of research because they “wanted the history facts of the battle to be the driving force and basis for everything [they] did.”

Arman said creating the event was a lot of fun, not only because he’s a huge history fan, but also because “it’s rare that you get to approach a campaign from both the traditional protagonist side of Wessex and antagonist side of the rampaging Vikings. Getting into the head of the Great Heathen Army and grounding the story in revenge and loss was key in carrying their campaign forward.”

Besides being historically accurate, they also wanted to get mood just right, and Arman got his inspiration from various sources. The TV show Vikings was his muse for the Great Heathen Army while Dungeons & Dragons, the Arthurian Legends, and even the movie Braveheart helped him shape Alfred and the Anglo-Saxons.

Overall, his “guide for these events is the nostalgia [he] felt when playing Age of Empires II for the first time and is a huge influence on how [he approaches] every March of Empires project.”

No matter the battle, historical or not, communication is the key to success. March of Empires’ players are constantly in contact with one another to coordinate their attacks, making it quite the social network!

Danail Danov, Game Community Manager, is all for bringing the community closer together and does this by “giving players the chance to work together towards a common goal.” He hosts many community challenges on Facebook where the rewards are influenced by the number of people who participate.

He loves these kinds of events because it brings everyone together, but March of Empires' players don't necessarily need Danail's encouragement. Sometimes they make up their own challenges for fun, like arranging their castles into a Christmas tree on the world map! 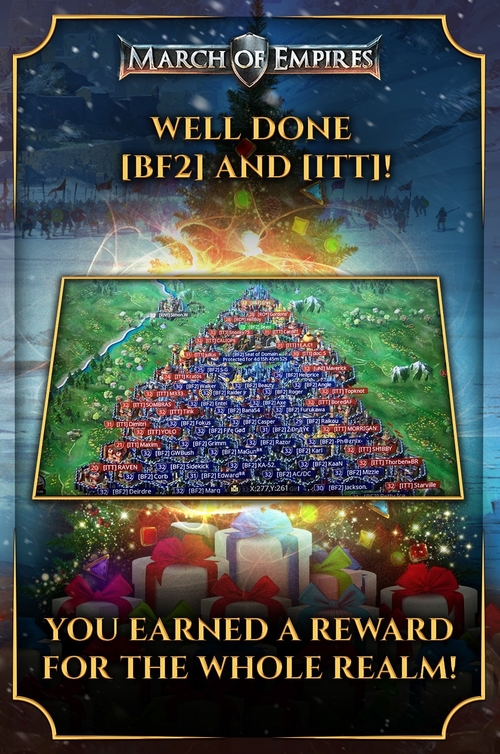 Although there is fierce competition between the players and factions, there’s also a lot of loyalty. They need to help one another to progress and succeed, and they’ve formed incredibly strong alliances that have also translated into the real-world: some of them have even gotten married after meeting each other in the game!

It’s safe to say that whatever the new year brings, the March of Empires community will face it together! The team has many exciting events planned for 2021, so make sure to follow them on Facebook to be the first to find out!