Sisters! Brothers! Gather around and witness the arrival of Iron Blade’s 9th update. Two new armors are the first blessing, providing you the opportunity to become even more powerful. The update doesn't stop there, however, as there are also a host of new social features to enjoy. Journey on to discover more…

An ossuary is a room decorated with bones - it doesn't matter if they belong to friends or foes, because in death there is nothing to separate them. Finding its inspiration from this morbid location, the Ossuary Gear Set has arrived. 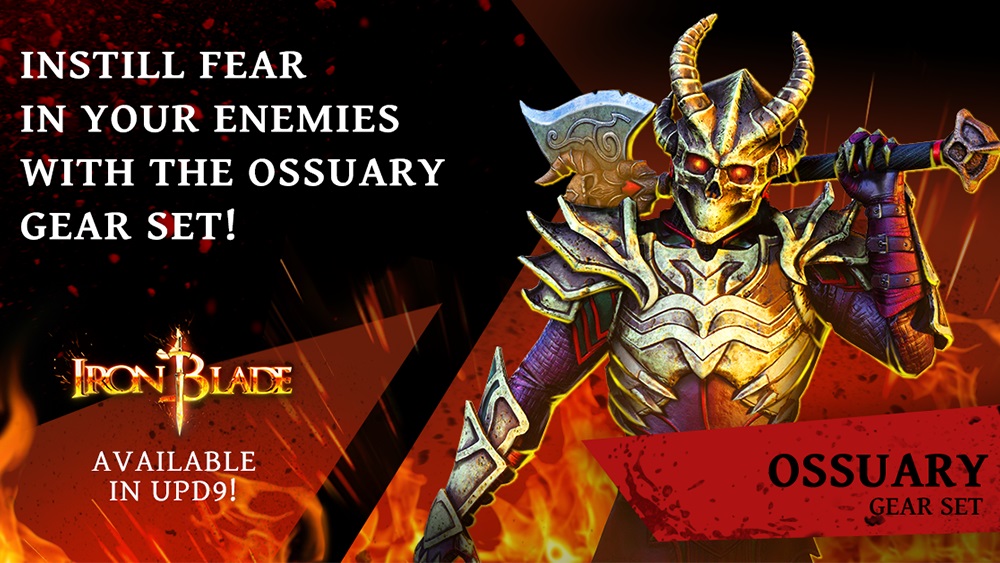 This powerful set is the product of a proud, fallen Templar. Determined to prove himself to local townsfolk, he set out on an impossible quest to recover a lost relic from actual Hell! Unsurprisingly, he failed. Captured by a demon he was put through agony under its control. To end his suffering, he made a deal to return home. He should have known better though because bargaining with such beasts never goes as intended...

Delivering him back to the town, he was unrecognizable. The demon took his skin in the trade. Now the Templar roams the land attempting to find a new skin, storing the bones of his fallen quarry in a hidden ossuary. It is this boney tale that inspires the powerful, skeletal Ossuary Gear Set – earn it in update 9 from the Tower of Trials or Boss Hunts.

Once again the Sisters’ Arena is returning with some amazing rewards. 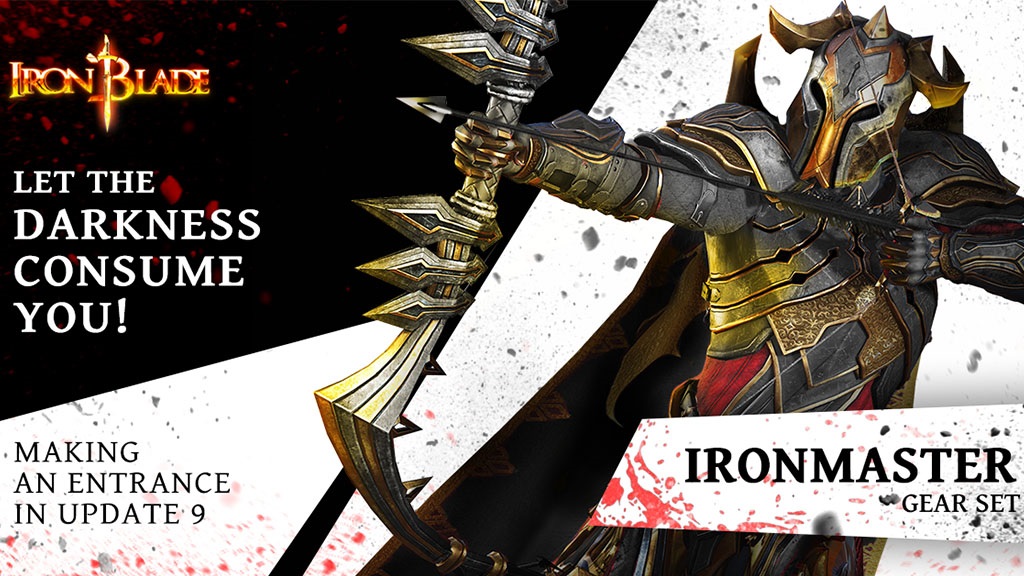 This time, the sisters have discovered a Gear Set infused with darkness. The Ironmaster Gear Set looks both evil and vicious. Covered in hard metal spikes, this gear is going to make you look and act like a cutthroat. Hit the arena now to earn this set and release your darker side.

Key among these is the “Ignore Player" button, allowing you to instantly mute anyone you are tired of. Also, to make sure that chatting is more convenient than ever, new messages will appear near the text entry section so you can see it more easily. Plus, your messages can be longer than ever! And that is just a few of the features being added to chat! 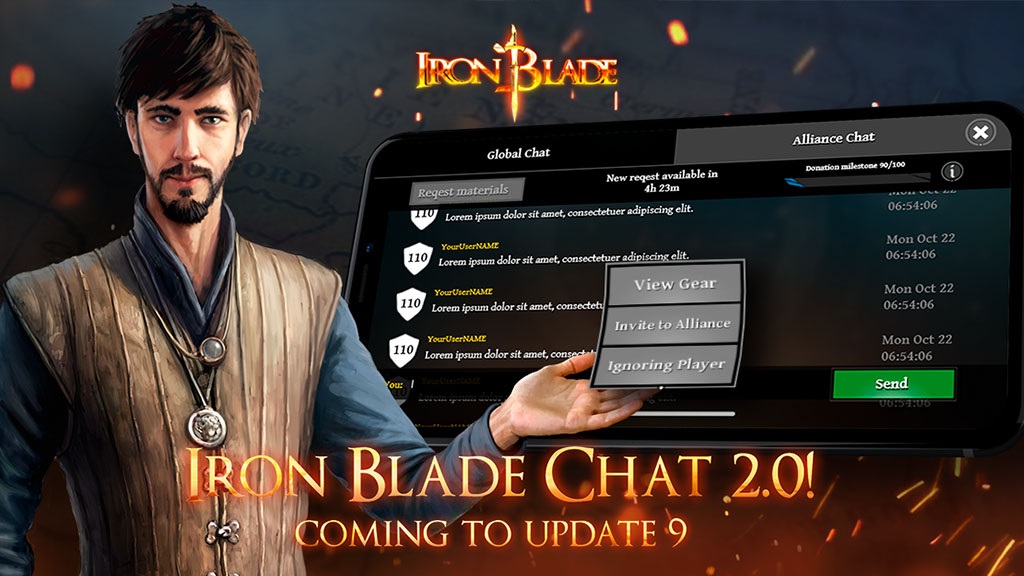 But, the community enhancements don't end there. A revamp to Alliances is also going to introduce a whole host of improvements.

One of these improvements is the Alliance Vault. This is a bank that allows you to contribute to a communal supply. Donate Gold, War Tokens, and Elemental Offerings (these can be earned through the campaign, events, and specific chests) to receive Contribution Points. These can then be traded for even greater rewards. The more members you have in your Alliance, the greater your vault’s Resource Capacity – and the greater the rewards you can amass.

Large and active Alliances will then be able to get extraordinary benefits by contributing to the Alliance Vault. Alliance members can donate specific resources to unlock special perks! Once unlocked, all members of the Alliance will benefit from the bonuses.

Alliance leaders can also enhance the perks by boosting them by using certain resources from the Alliance Vault. However, the boosts are limited and after their time expires the perk returns to normal.

Contribution Points are also going to count towards the Boon Progression Bar. This counter can earn you milestone rewards and other additional bonuses. The boons you earn here offer temporary (but powerful buffs) such as increased damage, health, or skill level while active. Boons come at a range of ranks (C-S) each of increasing power. When you claim a boon from the counter it resets, but any points you may have remaining in the next level are still there to count towards your next boon. 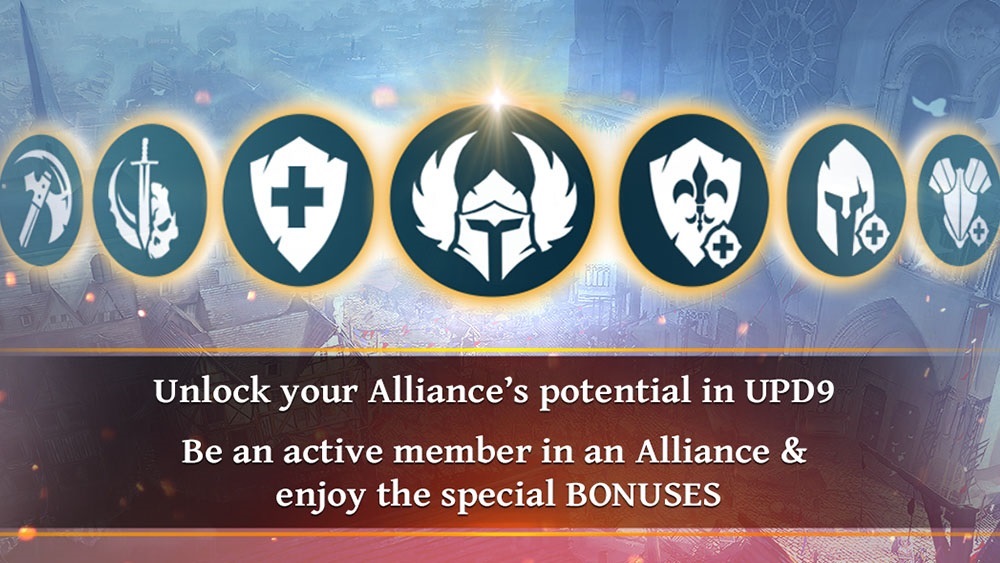 Two important notes, if you leave your Alliance you will lose your Contribution Points and having fewer members than required for a given perk will deactivate it. Something to keep in mind if you are abandoning old allies.

Begin your search for these dark armors now by downloading Iron Blade update 9 on iOS, Android, and Windows. And remember to join the community both in the revamped game chat and by following the game on Facebook, Instagram, Twitter, and YouTube.