Florent Juchniewicz is a member of the Game Lab, our R&D team at Gameloft Paris.

As a game designer, he creates new and innovative game prototypes for our community with the best ones being turned into full-fledged games.

The Game Lab is like a gaming laboratory where Florent and the rest of the team are able to let their imaginations run wild and experiment with the most fantastical game concepts. The sky’s the limit!

Every day is a new adventure, and you can learn more about him and the Game Lab below!

Hi, Florent! Tell us about yourself.
My name is Florent Juchniewicz, and I am 25 years old.  I joined the Game Lab 2 years ago after graduating from Supinfogame Rubika in Valenciennes as a game design intern, and after my internship, Gameloft offered me a job as a game designer.

I really like games that aren’t afraid of experimenting with new ways to have fun and to tell stories, and I joined the Game Lab with this state of mind to help them create innovative and enjoyable games.

I try to find inspiration everywhere, and some great sources are theme parks, shows, and books!

What is your role, and what do you enjoy most about your job?
I work as a game designer in the Game Lab prototypes team, which means we focus on the core experience of a game.

For a few months at a time, our small team develops a game demo that can potentially be turned into a full-fledged game with more content.

Our main goal with these prototypes is to experiment and create great games that feel fresh and new for players.

What I really enjoy with this job is the fact that you can quickly try out various ideas: one day you are creating a giant dragon hunt, and one month later, you’re designing pirate ship battles!

When we release each prototype on the stores, we see how players react to them and look at their feedback. Sometimes they like the ideas, sometimes not, but it’s always enjoyable to see that some of them are super involved (they write long reviews, create gameplay videos on YouTube, etc…)!

We’re always indirectly communicating with the players, and we learn a lot from them. They force us to ask ourselves why they really enjoy certain parts or why they didn’t understand others. In the end, we’re creating games for them, so their input is very important to us.

It’s always exciting when you’re refreshing the store and YouTube to see everyone’s reaction and if they like it. There are always kind comments, even for the prototypes that don’t perform that well, which is heartwarming!

Another memorable moment was when we participated in a game jam with the Narrative Team from Gameloft New York. We had to experiment new ways to tell stories, which was interesting and a lot of fun! 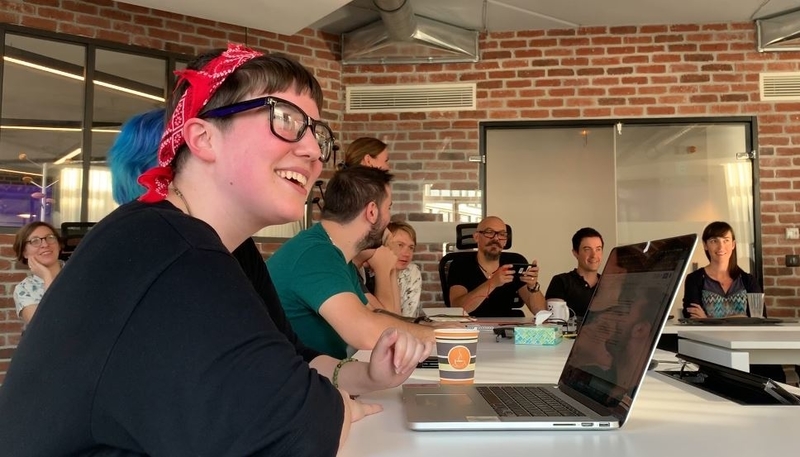 The 2019 game jame with all the Game Lab and narrative design teams in Paris.

What advice do you have for people who want to work in gaming in a similar role?
I think you really need to be curious. If you want to create fresh, new games you really need to keep updated on new movies, shows, and everything else that might boost your creativity.

You also need to be open-minded. We work in small teams where everyone can give their opinion on everything. Each idea is valuable!

Does working in a small, tight-knit team that experiments with new game concepts appeal to you? The Game Lab is currently looking for a senior game designer and UX/UI designer!  Apply today and stay tuned for another edition of Humans Behind the Game!