A Timeline of Gameloft in Paris

Over the past 20 years Gameloft Paris has changed its address 3 times. Each move marked an important step in the company’s history and has been a reflection of Gameloft’s overall growth and evolution of the gaming industry.

It’s often way easy to get caught up in what’s happening next quarter, but the goal of this retrospective is to take a moment and remember where we all used to be and how Gameloft became a Game Changer. 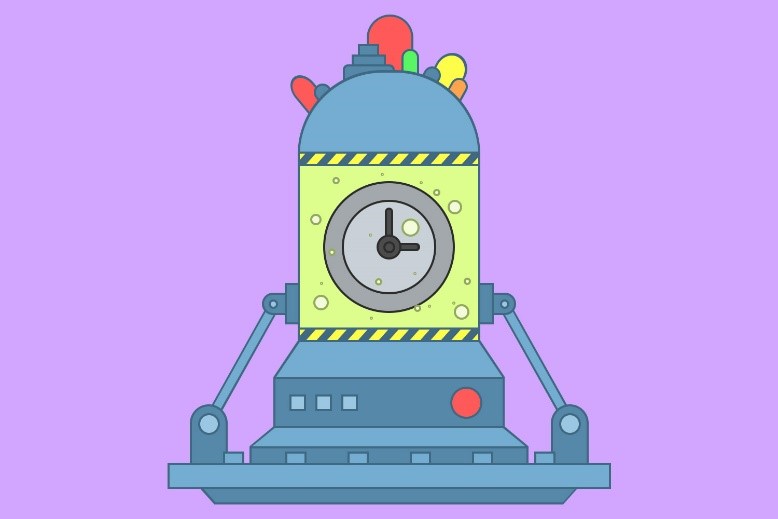 It has been a long time since somebody once told us frosted tips, trench coats, and CDs were cool. Even if the styles and trends of that bygone era seem ridiculous with our 2020 vision, those silly memories are a part of who and what we are today.

That turn of the millennium context is where the story of Gameloft begins. Everyone was partying like it was 1999 out of fear for Y2K.

Cyberpunk was in full swing, falling on the backdrop of a booming economy supported by this new thing called Internet and the World Wide Web. The information superhighway was not well understood and everyone wanted in on the gold rush on this new innovative platform. Any company that ended in dot com could be instantly rich.

“Ubisoft announced three new companies in January 2000, Ludiwap, Gameloft.com, and Ubiventures. At that time if a business said they were doing anything with the Internet, their stock instantly shot up.”
- Alexandre de Rochefort

When Gameloft, or more precisely, Gameloft.com was founded, the dotcom bubble was in full swing. However, the Gameloft.com of the new millennium had much less to do with the strange and expensive cordless phones that could be used anywhere and was more about online gaming platform and a community.

Ludiwap was the name of the real nascent mobile gaming company in the same group, and it’s also where Antonin Lhuillier started his Gameloft career. As the name implies the idea was to make games that utilized WAP, Wireless Application Protocol, a now nearly extinct technology that allowed early mobile devices to access the internet.

Ubiventures was an investment fund and was where Alexandre de Rochefort started his career at Gameloft. It was these three sister companies that occupied the first Gameloft office, a block away from the George V subway stop off the Champs Élysées. 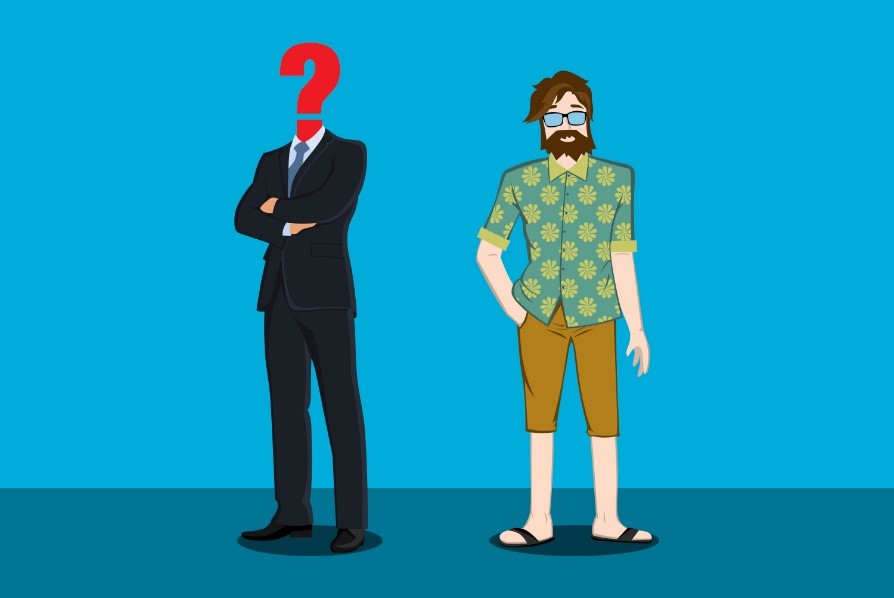 In the beginning there was nothing but a fresh dotcom startup in the middle of corporate France. The office was in an upscale building off the Champs Élysées. The young people entering the building had an interestingly significant difference in their work/life balance and a shockingly casual dress code for the established veterans of the up-scale neighborhood.

Between the business suits and corporate plans was Gameloft.com bringing in programmers with long hair and flip flops. It got to the point where other companies were filing complaints against the “poorly dressed” Gameloft employees. 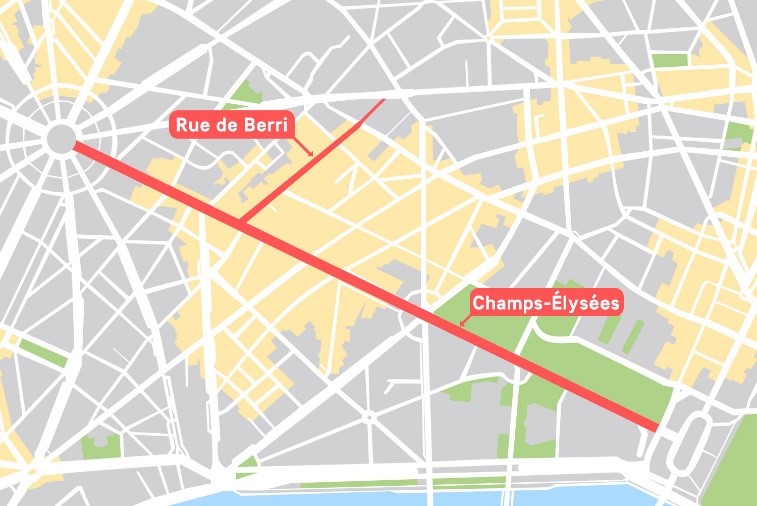 While the office was very nice and had all the bells and whistles that come with being one of the most expensive pieces of real estate in the world, it was also very sterile.

“There was no creative fiber in the area at all.”
- Antonin Lhuillier

The company was in the strange state of being a youthful startup but existing in a location that did not at all reflect that passion and ambition. The long halls and beautiful terrace were nice, but there was always a feeling that Gameloft did not belong.

Through this awkward phase, Gameloft.com and Ludiwap were riding on the benefits of the dotcom hysteria. Every new idea was filled with excitement, but when the bubble burst tech companies around the world, including Gameloft, felt the ripples.

The unfortunate consequences of being somewhat misplaced and entering a market that many people did not quite understand meant that the company would need to adapt.

So around the same time when Gameloft.com and Ludiwap became just Gameloft, the young company also moved out of the corporate environment and onto Rue Greneta. 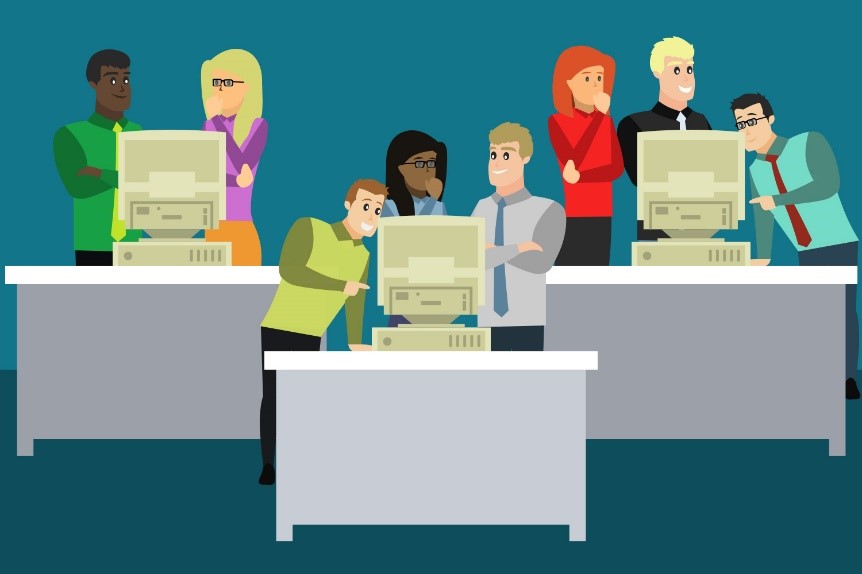 When the bubble burst, it was time to take a hard look in the mirror and find out what kind of business could actually thrive in the new millennium. That meant big changes.

Gameloft cut its teeth on those Java games while its HQ was on Greneta.  The technology was still in its infancy, but Gameloft really took advantage everything it had to offer, quickly becoming the leader of the new mobile market.

The success of Java games led to real growth that also quickly made the office on Grenata quite crowded. Huge CRT monitors and no real meeting rooms made it an absolutely rambunctious place.

“There was no space anywhere and the only meeting table was right next to the CEO!”
-Antonin Lhuillier

Even today, the nostalgia runs deep and many people see the Greneta period as the time that made Gameloft into the company it is today. It’s important to note however that while the office is remembered as the Greneta office, it’s actually the other side of the street that brings up more memories and laughs from those who worked there.

“Rue Greneta was the prestigious postal address, but the real entrance was on Rue Saint-Denis.”
- Antonin Lhuillier 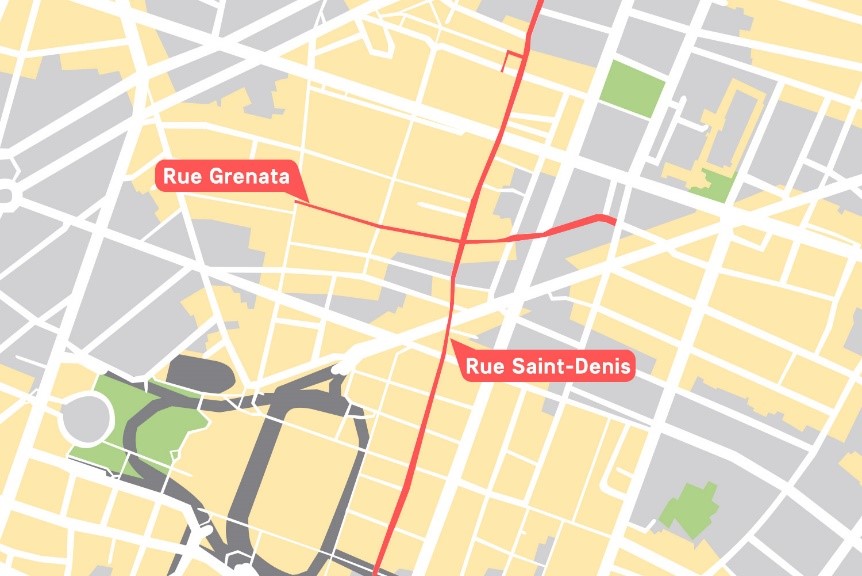 Rue Saint-Denis and all the colors of the Quartier Montorgueil gave Gameloft a new sense of joy after its beginnings in an ultra-corporate environment. While the road may be remembered for its unique taste in shops, it was an interesting mix of the raunchy city, competitive business, and a hipster revolution.

However, as the years went on and Gameloft grew bigger and bigger, it was becoming impossible to ignore that the office was simply too small. 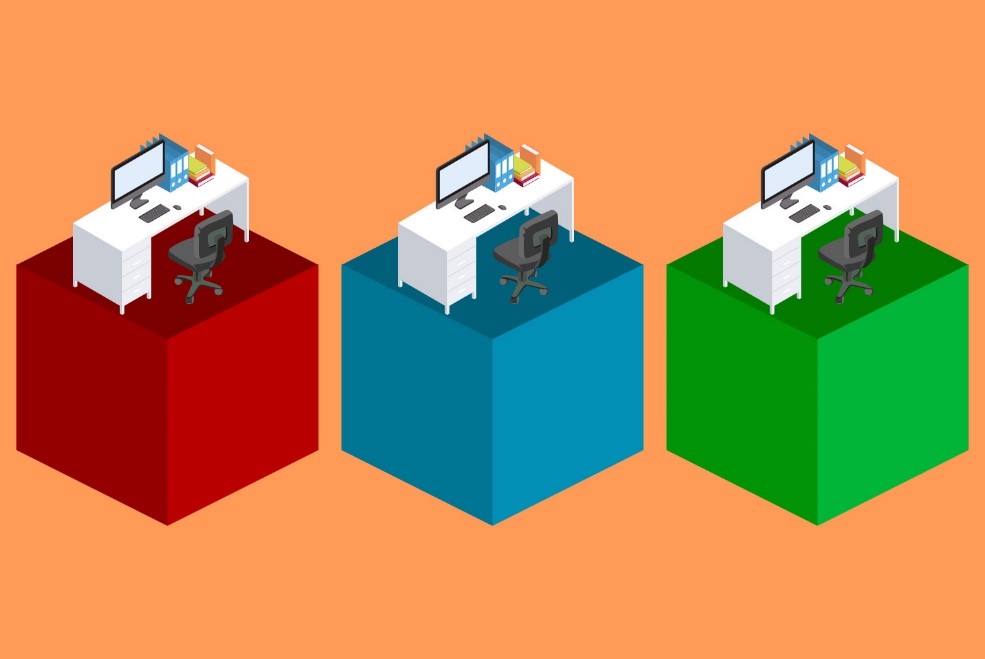 The crossing at Greneta and Saint-Denis gave the company a stronger spirit after surviving the dotcom bubble and the Rue de Berri, but it was time for change once again. 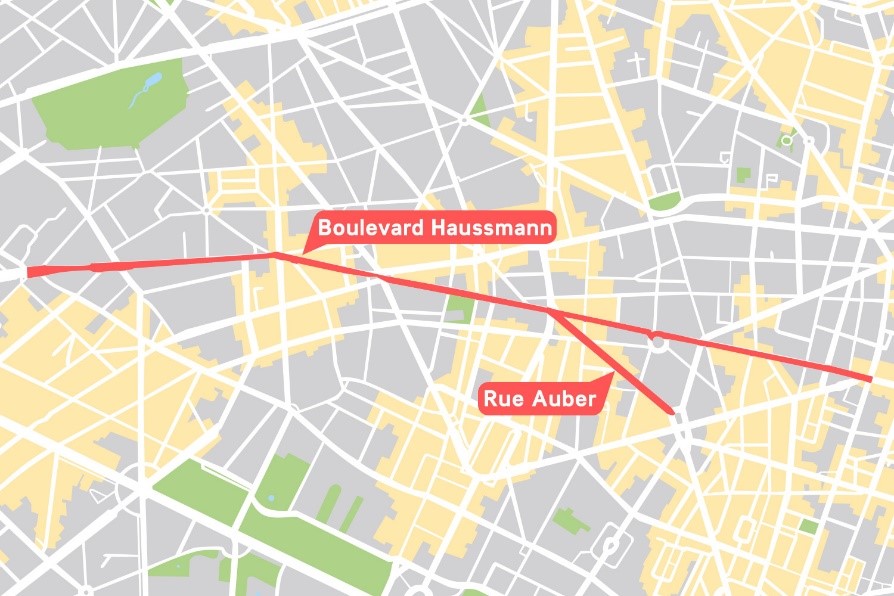 The move to Boulevard Haussmann was largely utilitarian at first. The company needed more space and so they acquired more space. The cold logic of this was reflected in the office that quickly became a workplace and nothing more.

Outside of the office, there was however a huge shift in the industry. The Java games of 2006 had all but been completely replaced by iOs and Android apps!

“In 2012 we ended up deciding not to move, but we would at least remake the office.”
- Alexandre de Rochefort

Standard office technology and supplies had also progressed with more and more flat screen monitors replacing their bulkier, desk devouring CRT cousins. The new space provided by smaller screens made room for new meeting rooms themed with a different hue, giving the entire area pigmented accents as you walked past the busy workers.

It may not seem like much, but the striking colors represented a stark shift from the more frantic startup days still fresh in many people’s minds. 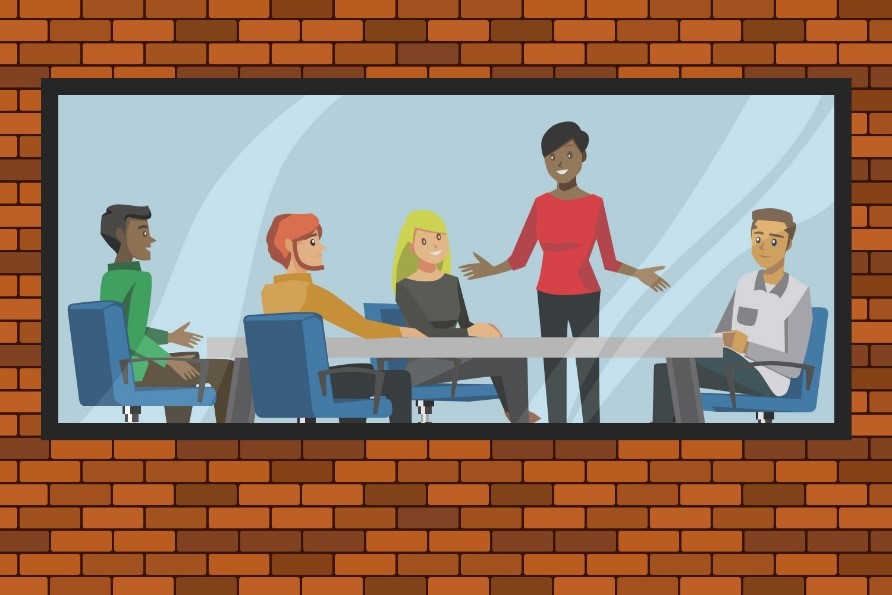 In 2018, Gameloft Paris moved again, but this time only from the fifth to the fourth floor. A stronger emphasis was placed on both technical organization and office aesthetics and a theme was established with all the wires finding their way from the servers to the desktops without any trace along the floor.

Gameloft entered the world during the frenzy of the dotcom bubble as an online gaming portal with a name as dated as the era: Gameloft.com. The many offices north of the Seine have all played a part in the company’s history and contributed to its growth.

From ancient flip phones to the latest touchscreen masterpieces, from cumbersome CRT monitors to sleek widescreen LCD screens, from WAP portals to innovative cloud gaming, every moment has impacted the look and feel of the company, the games, and the office.

The changes also unfortunately mean only a handful of old feature phones survived all 20 years of Gameloft’s history in Paris. The progress and innovation throughout the years have left much of the old to be left behind as the company marched forward.

“I don’t think anything has survived all the moves. All the technology has changed and been replaced over the years. The only thing that is still here is us.”
- Alexandre de Rochefort

There are a few employees who are still here though. Their story of where Gameloft has been and their vision of where Gameloft will go provide a solid framework for anyone looking to gain insight into what the future of gaming should be.

The intangible contributions over the years had made the company into what it is today with everyone continuing to create new memories that will be retold 20 years from now.

Finding a place that fits both the past and looks towards the future is where Gameloft sits today. The fixed location is not as important as the spirit that comes from the people behind every moment of fun. That drive to create games and make the most of the latest technologies is the most important ingredient to any Gameloft office and will persist no matter where the future takes us.

Having a clear vision as a Game Changer and a strong passion to play is what defines those decisions.

No one can predict the future, but Gameloft is always ready to accept the fun that comes with a new challenge.

Special thanks to John Bauer for writing this article and taking us back in time to Gameloft’s humble beginnings!