Gameloft and SNK are joining forces with the KOF vs DHC: King of Champions Event. This landmark moment sees two THE KING OF FIGHTERS characters arriving in Dungeon Hunter Champions. We couldn’t be more excited.

Discover more about the KOF vs DHC: King of Champions Event.

To celebrate, we are offering two members of the Dungeon Hunter Champions community the chance to win a trip to SNK Studios. Located in the wonderful city of Osaka, Japan, this will be an experience to remember.

Visit an icon of gaming

The Japanese developer, SNK, has made an indelible mark on gaming history. Their arcade machines and Neo Geo home consoles set a high water mark during the early 1990s. The eye-catching large sprites and fluid animation of their games - which turned heads in arcades - was matched only by the incredible gameplay their titles offered. This gameplay continues to influence the industry to this day, a fact highlighted by their many franchises enduring popularity. 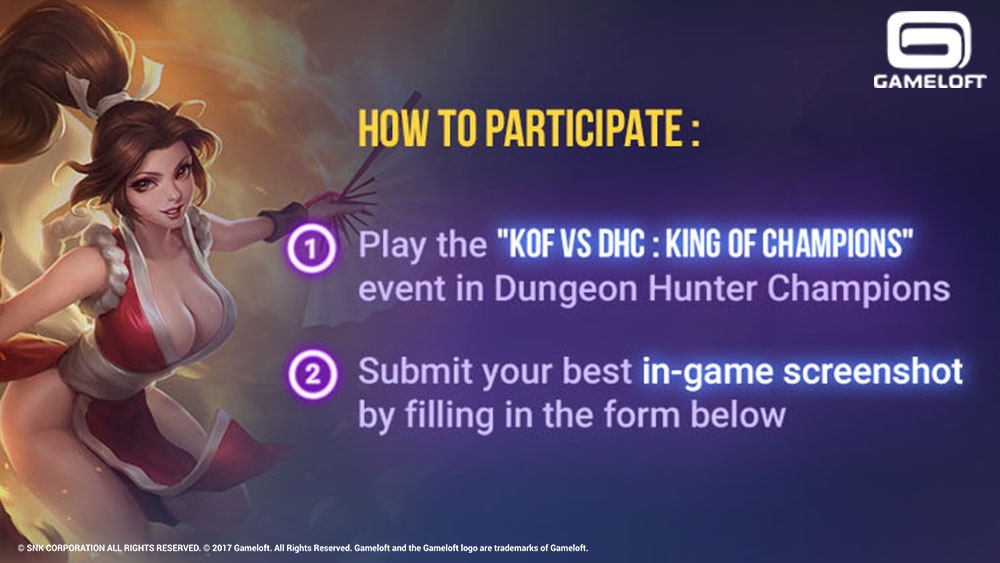 Which is why Gameloft is so excited to be welcoming two characters from SNK’s iconic fighting game, THE KING OF FIGHTERS, to Dungeon Hunter Champions. Mai Shiranui and Kyo Kusanagi are joining the roster of Champions during a new Time Limited Event.

In honor of this prestigious event, we want to send two lucky Dungeon Hunter Champion fans to SNK Studios! Based in Osaka, Japan, this is the trip of a lifetime for any fan of SNK and gaming history.

One way to win a place on this trip is by playing Dungeon Hunter Champions during the crossover event. In-game, there will be a competition that enters you for a chance to be part of this incredible journey. If you don’t currently have DHC installed, you can download it now on iOS, Android, and Windows.

The other way to enter is by heading to the KOF vs DHC: King of Champions competition page and following the steps. Here, not only is one player going to be lucky enough to win a trip to Osaka but there will also be 10 runners-up. Each of these fortunate individuals is going to win themselves an exclusive KOF x DHC swag bag!

Be sure to read the full terms and conditions for both competitions before entering. You can find them here on the hub page.

Enter now for your chance to go on this incredible trip to SNK Studios in Osaka, Japan, with Gameloft’s Dungeon Hunter Champions and THE KING OF FIGHTERS.