In 2004, Asphalt: Urban GT's development focused on bringing a console racing experience to mobile. It was a great success, not just technically, but also in terms of its critical and fan reception, so a sequel was assured. However, just a year later the challenge for Asphalt: Urban GT 2 was going to be topping the first game’s visuals, scope, and design, in order to deliver an even more authentic street-racing experience.

Asphalt: Urban GT 2’s initial concept built on those of the first game. As the original design document states, the target was to make “the most exhilarating street racing experience available for mobile.” 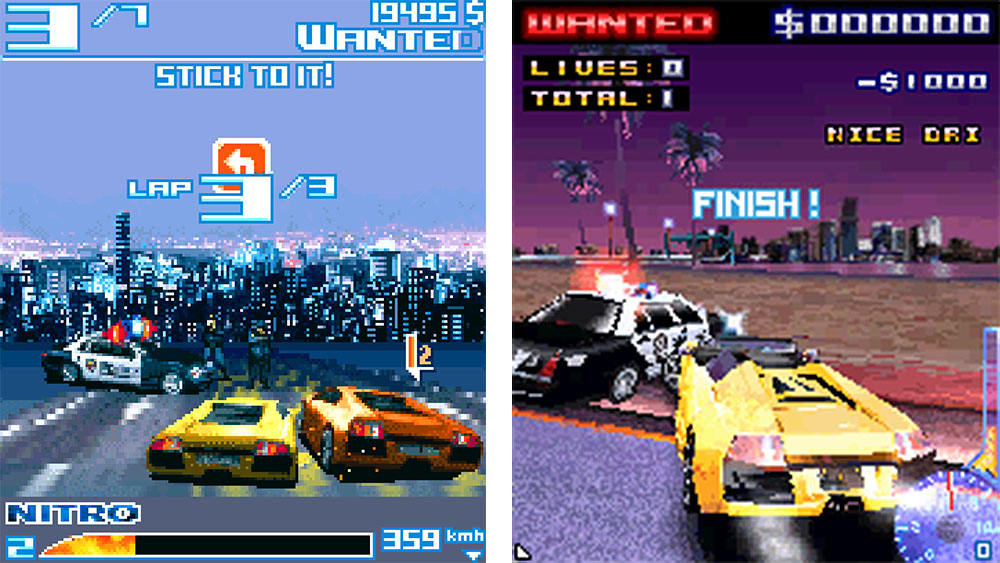 But, while only a year had passed, much had changed in the world of mobile racing. Specifically, the success of the original game set a precedent, and the team wanted to exceed its previous efforts. However, it was more than pride that drove this ambition. Since Asphalt: Urban GT, other mobile racers had upped their game. So, the studio was also aiming to reach feature parity with the new competition.

With this in mind, the team set its sights high and began simultaneous development of the 2D and 3D versions of the game, as well as trying to include a greater number of luxury licensed vehicles, celebrity NPCs, and music from Moby for the soundtrack. "High-speed, no-limits thrills," was the team mantra. More police chases, more spectacular collisions, more cars, more ways to tune your cars, more tracks... you get the idea.

But “more” was not enough by itself; we also needed it to be better. 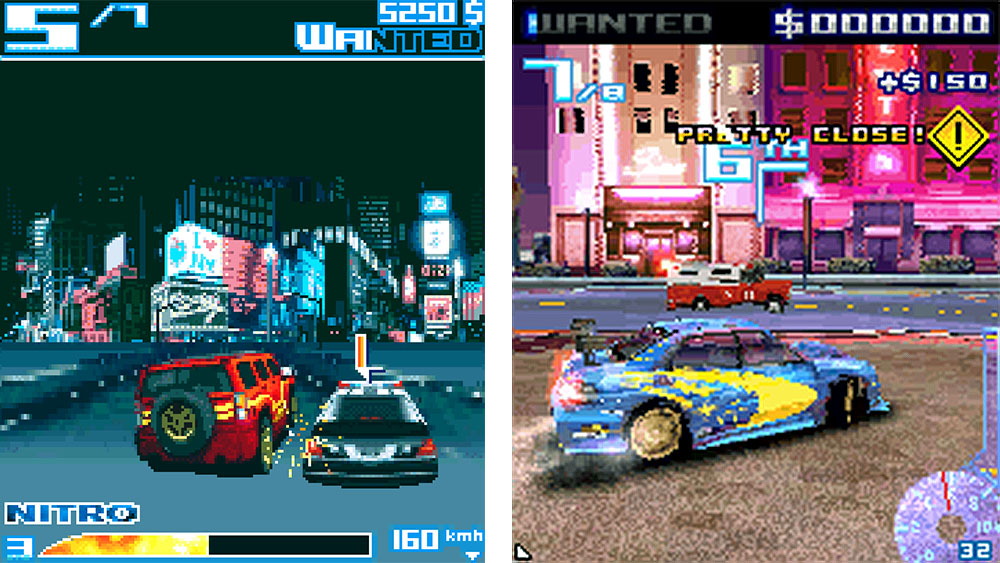 By joining with some of the world’s premier car and bike manufacturers, Asphalt: Urban GT 2 allowed racing fans to satisfy all of their wildest automotive fantasies.

Because of this push to make Asphalt: Urban GT 2 the best it could be on each platform, differences between the 2D and 3D versions began to emerge. The 2D version of the game had eight cars and two bikes. From a ‘60s muscle car to the ultra-luxury Lamborghini, there was a good range of rides to enjoy. But players with 3D-capable phones (i.e., the revolutionary N-Gage from Nokia), a Nintendo DS, or a Sony PSP, were treated to much more. In total there were 45 licensed vehicles available in these versions, adding icons like the Skyline GTR to the garage. But, however you played Asphalt: Urban GT 2, the team went out of their way to ensure that every car and bike was reproduced in the best possible detail.

Through the game, you could unlock new rides by winning cash in races. But to get the most out of each car you had to use Asphalt: Urban GT 2’s advanced tuning options. Making these changes and upgrades allowed substantial changes to be made that impacted the way your ride handled, giving you an edge without having to buy a new car. 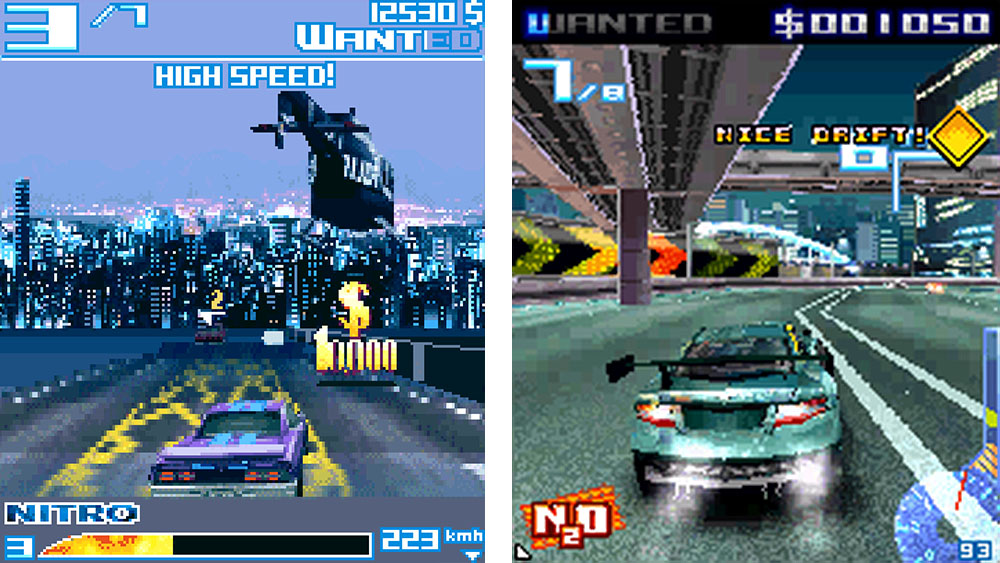 Environment artists set about creating eight tracks from cities around the world. Each of these had their own distinct look and feel. Hong Kong and New York both boasted neon-drenched night courses. Baghdad provided an opportunity to create a track where vivid yellow sand contrasts the dark sky. Similarly, Paris, London, Rio de Janeiro, Miami, and Los Angeles all offered their own visual flair and distinct hazards.

But pretty roads alone do not make a good race - that requires a challenge. Every location you travelled to in Asphalt: Urban GT 2 was filled with aggressive competition. Racers were willing to drive you off the track and into the dirt, traffic, or obstacles. With the ability to completely take you down, these impacts could seriously ruin your race.

To kick this action into high gear, the police chase intensity was increased. Staying ahead of these law enforcers got harder as you raced because they were paying attention. The more laws you broke, the greater their response. First squad cars would chase you; next there would be roadblocks, before finally police choppers were dispatched to take you down. 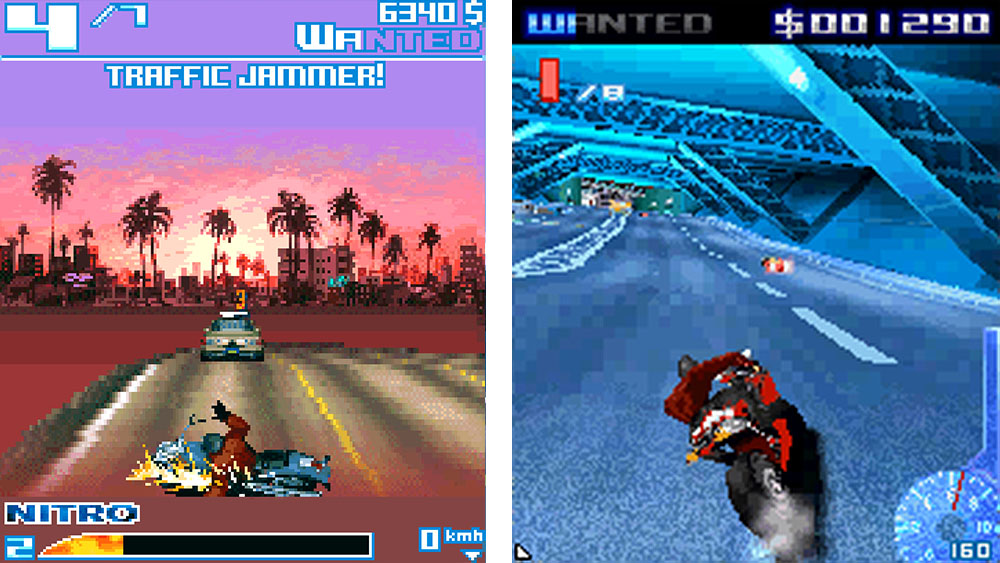 It was this variety of options that allowed Asphalt: Urban GT 2 to outpace the competition. While many other titles in 2005 offered accelerating racing, few provided the rounded experience that this team created. This was in part due to having more tracks and cars to extend the gameplay offering. But it was the challenging police pursuits, next level audio and visual presentation, and car customization options that really solidified “Asphalt” as a name all mobile racing fans could trust.