The thrill of racing fills every turn in Asphalt 9: Legends. Everyone loves the incredible feeling of driving super sports cars like the Terzo Millennio and putting them to the test of speed.

But what could be cooler than taking the Legendary Trip and driving the Terzo Millennio IRL?

At the world-class Geneva Motor Show, Asphalt 9: Legends and Lamborghini combined the virtual and real worlds with the public unveiling of the new Huracán EVO Spyder.

At the same moment the curtain lifted on stage and the new Lamborghini opened its doors to the Geneva crowd, it was also unveiled in Asphalt 9: Legends!

And that's not all! To top it off, the big unveiling marks the start of a new event featuring the Huracán EVO Spyder.

From March 8th to March 21st, the only place you can drive the Huracán EVO Spyder is in Asphalt 9: Legends. If you've ever dreamed of driving the latest and greatest Lamobrghini, now's your chance to jump in and start letting the tires spin!

The special event will end with a final ranked event and an exclusive 1/43 model of the new Lamborghini for five lucky winners. Get your cars in gear because it’s time to start racing and collecting the blueprints needed to unlock the Huracán! 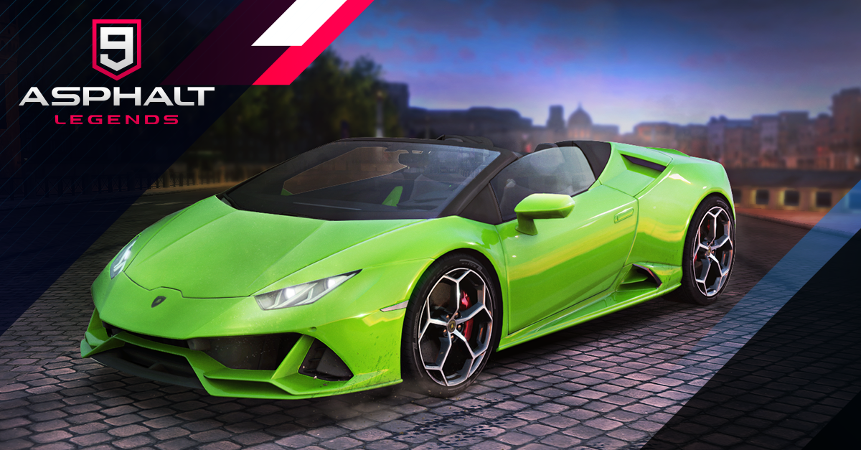 Relieve that itch and take the new Huracán EVO Spyder for a spin!

Start living the dream right now with the most exclusive Lamborghini experience in the world and download Asphalt 9: Legends!