War Child UK is a superb charity that is dedicated to protect, educate, and stand up for the rights of children affected by conflict. It is a wonderful cause, which Gameloft's War Planet Online and March of Empires have joined forces to help. Thanks to their players, these two titles have been able to make a donation of €24,281!

Helping those most in need

By standing up for the world's most disadvantaged children, War Child UK seeks to keep kids safe and prepare them for a better, more hopeful future.

Part of this work sees the charity support children and their families in war-zones directly. It is a challenging but vital task that reaches out to those most vulnerable and in need.

But War Child UK doesn’t just protect those it helps. The charity also works towards children's education and rehabilitation in dedicated safe spaces. Only with this long term vision can it fight to improve these children's lives forever, and give them the tools they need for the future.

War Child UK fights the root of the problem and beyond, nurturing and transforming the lives of those helped. In 2016 the charity reached 109,296 people in need - from children to adults. Plus, 61% of the kids they worked with on education programs were able to complete their end of year exams.

Currently working with their partners in 15 countries across Africa, Asia, the Middle East, and Latin America, War Child UK hopes to reach 260,000 children by 2019. To aid with this incredible goal, Gameloft’s two military strategy games - March of Empires and War Planet Online - mobilized their communities to donate to the cause.

As part of War Child UK's Armistice, a campaign which encourages peaceful gameplay in support of children affected by conflict, both games created a special "War Child Bundle". Filled with non-violent items, 50% of the net profits from these purchases went directly to the charity.

It was thanks to their amazing fans that March of Empires was able to contribute a whooping €16,881. War Planet Online also added to this with a donation of €7,940, making an awesome combined total of €24,281. 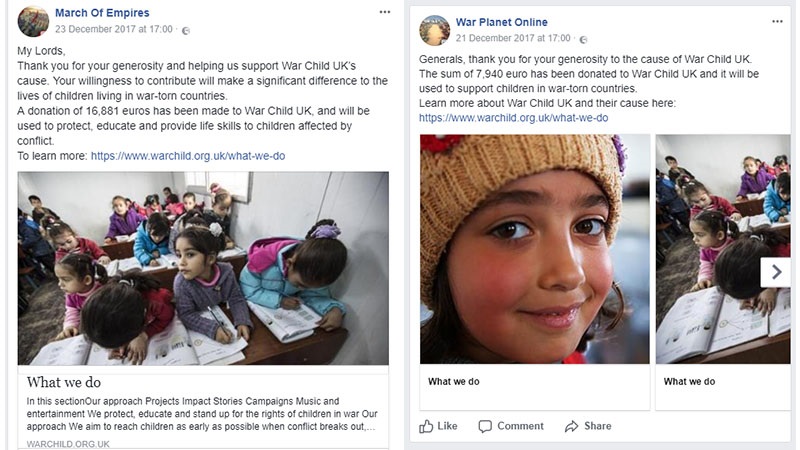 This is money that War Child UK can use to continue its incredible work. This includes rehabilitating ex-child soldiers in the Central African Republic, educating in Syria, and fighting for justice for young people who have been detained in Afghanistan.

Join the amazing communities that made this possible in War Planet Online and March of Empires. You can also discover them on the games' Facebook pages (WPO|MoE). Or, to learn more about War Child UK or make a donation, you can see the charity's homepage here.