Written by Francke Preyser On December 18, 2018

And so we reach the end of another fantastic year here at Gameloft. As we all begin to reflect on our accomplishments we’ve decided that some traditions are worth keeping, so we bring you the Great Gameloft Giveaway (or triple G as it’s come to be called by nobody).

We’ve taken it to the next level this year, with multiple winners of some serious in game prizes finishing off with a huge grand prize draw at the end of the event where one lucky winner will be receiving a Huawei P20 Pro Smartphone. We thought we’d take a moment to have a look at some of the games involved this year and share a few of our personal highlights.

Before that though I bring you the rules of engagement for this year’s giveaway. Each day of the giveaway you can enter to win prizes for a specific game, each day that you enter will also automatically enter you into the grand prize draw. Each game will have multiple winners so you’ll have plenty of opportunities to grab some prizes for your favourite Gameloft Games. If there’s a prize for a game you don’t have, you can always check it out via the download links below. 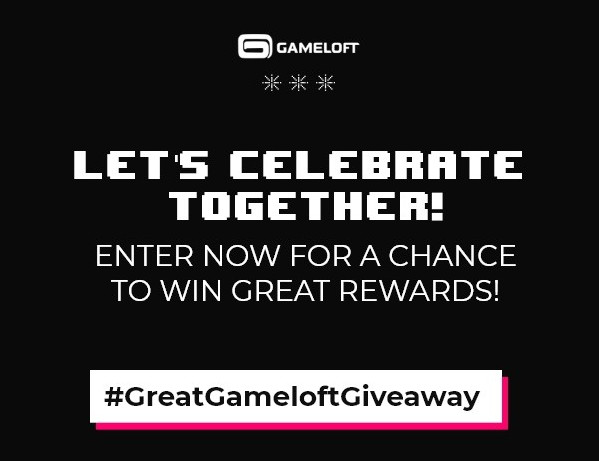 We’re starting things off with Asphalt 9, we’ll have 10 prizes up for grabs. Launching earlier this year Asphalt 9 has had an astounding 2018 receiving multiple awards and nominations including very recently a Google Play Best of 2018 award for its stunning visuals.

Sniper Fury is finishing off their year by giving 100 players a host of goodies to help bring death upon your targets. Some of their 2018 highlights include winning the first ever Gameloft Cup, beating out March of Empires in a nail-biting Final.

Next, Dungeon Hunter 5 is offering up 10 prizes for those brave enough to step up and become the most notorious bounty hunter of them all. If you’re more of a team player then no fear because we also have 20 great prizes for Dungeon Hunter Champions coming your way later in the giveaway.

March of Empires and War Planet Online are celebrating a great year having raised over €63,000 for Warchild UK. All of us here thank each and every one of you that donated to this fantastic charity that works tirelessly to help children affected by war across the globe. To show our appreciation March of Empires has 50 prizes and War Planet Online is generously offering 10 lucky winners some serious cred.

Iron Blade brings us 15 lucky winners. After a sensational year with some awesome updates they can’t help themselves with sharing the news about their successes, from the Knights Assemble community initiative in January all the way to the very popular #templarpose event just recently.

Ending the festivities Gangstar Vegas is giving 20 winners some serious street cred with a special item before we close off with Modern Combat Versus and 20 prizes for the lucky winners.

*download any of the games by clicking on its icon!

Don’t forget that each day you enter will automatically enter you into the grand prize draw to win a Huawei P20 pro smartphone so even if the prize is for a game you don’t play, well, check it out! You never know, you might just find yourself enjoying an all new adventure.

*Terms and conditions for the Great Gameloft Giveaway available here