Asphalt 4: Elite Racing took Gameloft’s premier mobile racing franchise and supercharged it for the iPhone. But, with Apple improving their device and other smartphones entering the market, the team quickly geared up for Asphalt 5. With the previous title offering a rolling start in terms of technology, this was a chance to supercharge the franchise.

Dive back into more Asphalt Memories.

With iPhone’s popularity exploding and Android arriving on the scene, the market was primed for Asphalt 5. After the success of Asphalt 4 anticipation was high, and the team had no intention of letting down fans. Improvements were planned for every aspect. All of this would be made possible thanks to a brand new game engine, which allowed for a slick arcade feel with tighter touch and tilt controls to underpin the action. 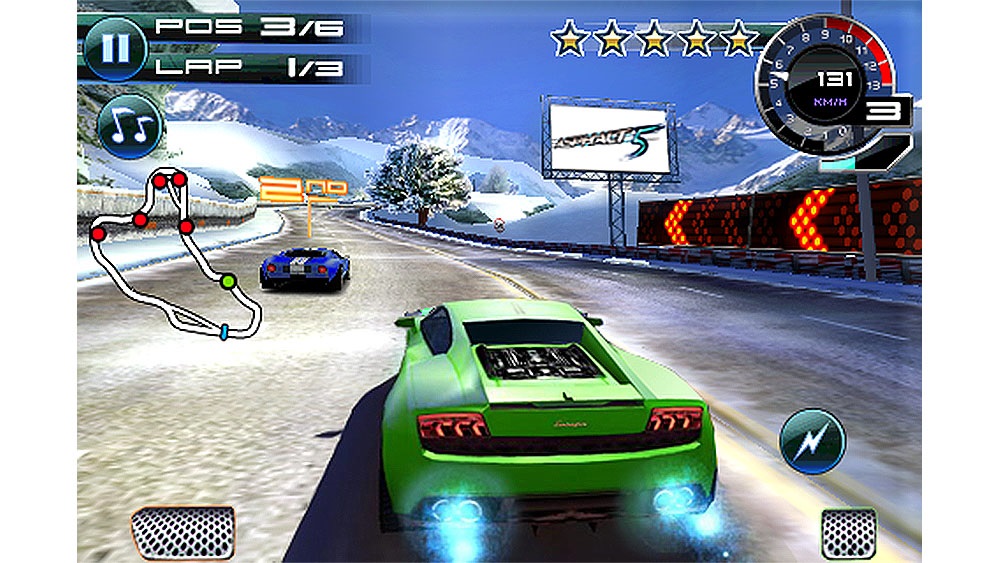 Have it your way

Asphalt 5 featured 12 incredible tracks from around the world. Traveling the globe, each course offered a unique look and style that made every race feel exciting.

These prestigious locations looked better than ever in Asphalt 5’s game engine which allowed for improved visuals and artistic flourishes. Moving between glorious exotic locations like Hawaii, Aspen, and Saint Tropez, gave players a taste of extravagance. This was set alongside more urban environments, including New York, Rio de Janeiro, and Paris. Here the high-speed racing acted as wish fulfillment, as players sped down familiar, iconic roads.

Once you could grab this from the App Store... not any more. 🙁

These cities were joined by Tuscany, Athens, Rome, Las Vegas, Miami, and San Francisco – all of which bought their own twists (and turns). Plus, the Android version – which released six months later – featured even more, with Tokyo, Cape Town, Berlin, Los Angeles, and Madrid, being added to the world tour.

To add to the variety provided by these cities, more diversity was added by Asphalt 5’s advanced track design. One of these advanced elements was track surface. Moving between snow, ice, dirt, water, and tarmac, saw vehicle’s traction change. Thus racers were forced to adjust on the fly to conditions as they drifted between areas. 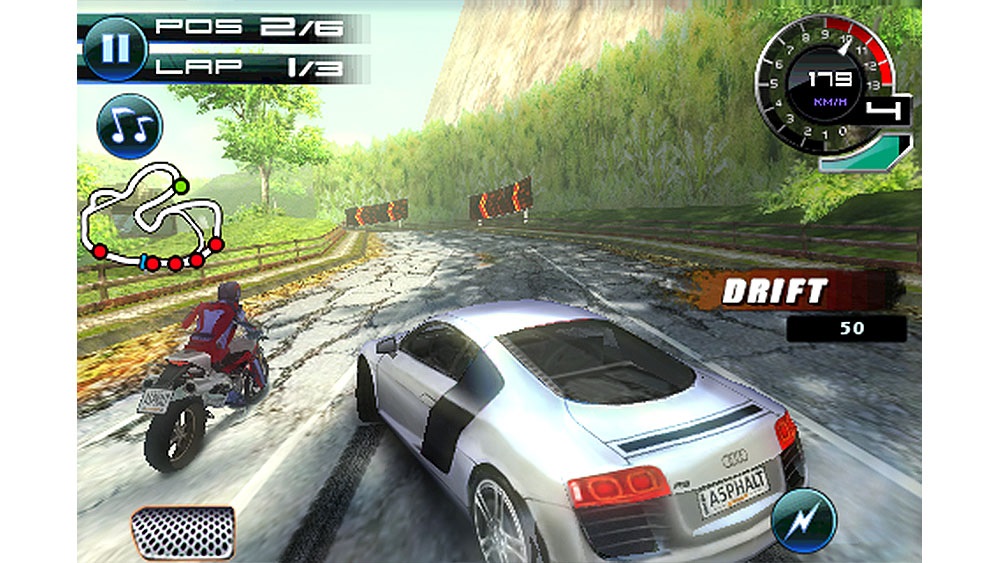 Shifting weather further highlighted these surface changes. Snowfall, rain, fog, and a variety of other conditions could alter different areas of the track, and impair visibility making it harder to prepare. This increased the dynamism creating constantly evolving races, so you never knew what would happen from one lap to the next.

The team also poured their attention into every tracks’ design. Maps were filled with shortcuts, off-road sections, and jumps. Looking at modern Asphalt games, this may not be a huge surprise, but at the time this level of complexity was something special.

Finding the best route and racing line in each location was key to success – but not every event would demand the same path. With eight different event types to participate in (three more than Asphalt 4: Elite Racing), sometimes different tactics were required. New modes expanded the challenge offered while existing modes were revamped to ensure that they felt fresh. 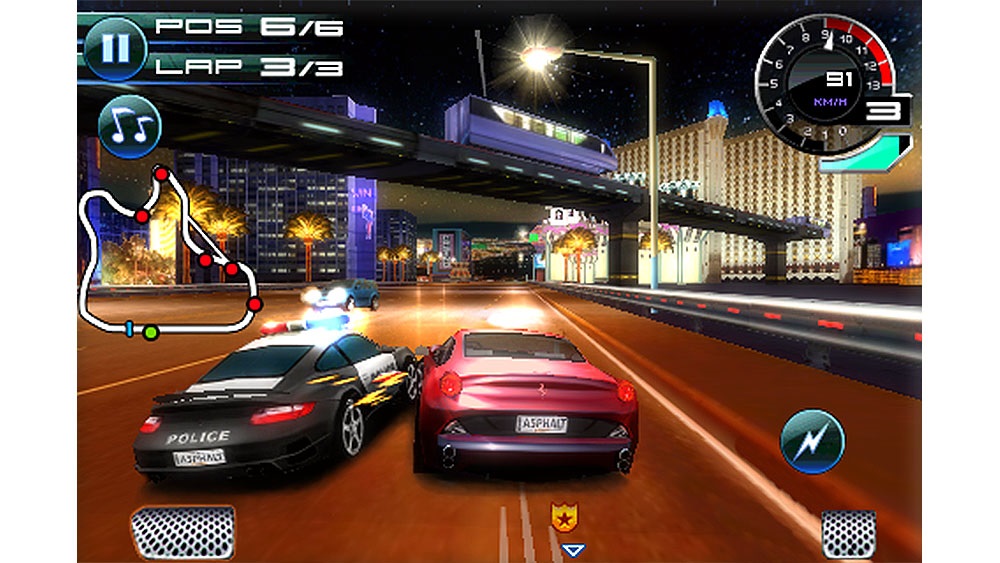 One of the new events was Elimination, which saw stragglers being removed from the race. This is now a main stay of the franchise, challenging players to this day with nail-biting tension.

All of these modes could be experienced as players raced their way through Asphalt 5’s Career Mode. This married these locations and modes into an experience that pushed racers to the limit as they unlocked increasingly skilled opponents and police pursuers. These were made more exciting by improved AI, which made other drivers' behavior feel almost real.

To help beat these obstacles, racing through the single-player earned racers cash to upgrade and invest in the games huge garage of 33 licensed machines. There were machines from Ferrari, Lamborghini, BMW, and more - all realized in more detail than any previous Asphalt release. And, in Asphalt 5, all of this detail could be enjoyed from three perspectives: far, near, or inside. 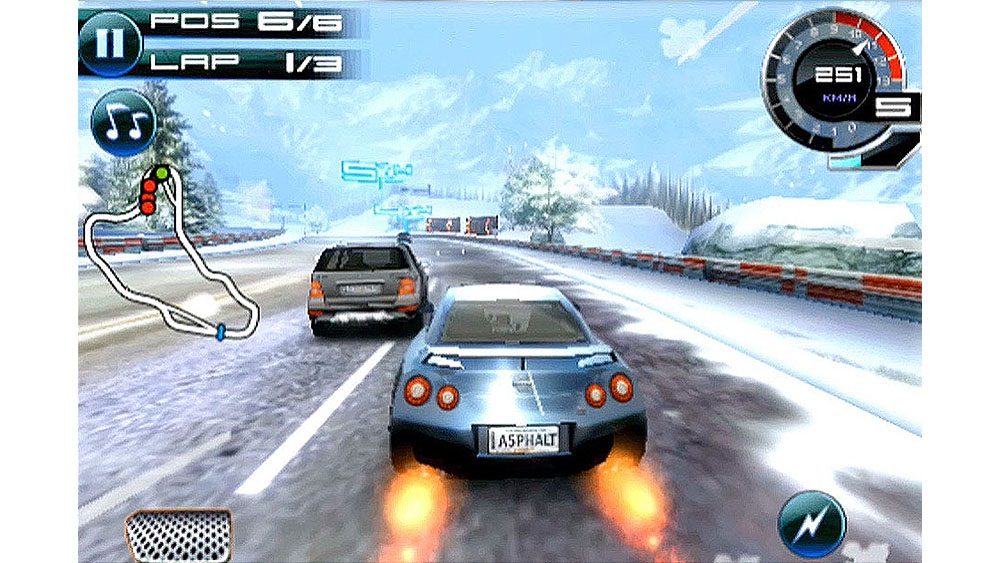 It was possible to optimize all of these vehicles with the game’s comprehensive Tuning Mode. In the garage, it was now possible to tweak and tune cars and bikes to their full potential… both in terms of performance and style.

Players could now improve their machines handling, engine, boost, and even give it a new coat of paint. But these upgrades were not limited to a single element. For example, to squeeze every ounce of performance from the engine, you would need to max out the Engine Control Unit, Intake, Exhaust, and Turbo. With every element having a similar range of improvements to make, there was a mountain of performance for every machine to climb.

There were other huge advancements made in Asphalt 5, some of which we now take for granted. While the previous game certainly took advantage of Bluetooth multiplayer, a true online versus mode was introduced in A5. Now players could truly show off their skills to friends all over the world - a first for Gameloft's racers. 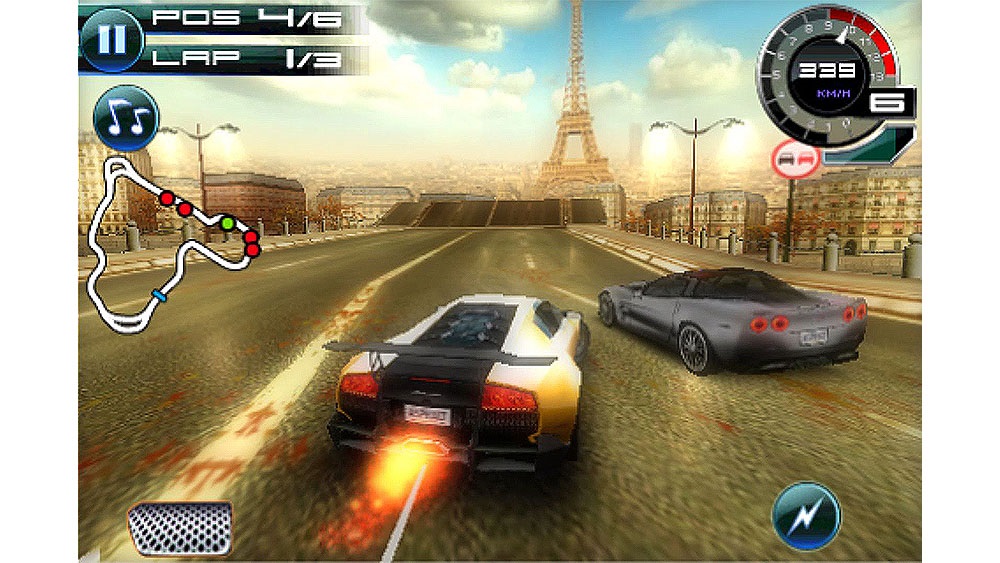 For a further online challenge, Ghost Racers were also introduced in A5. Representing another real racer - or a past performance - these translucent machines would speed around tracks alongside players. This offered a visual benchmark to which they could compare their performance – even when racing alone.

Asphalt 5 looked incredible as it squeezed absolutely everything it could from the new hardware on which it was appearing. It set a standard for the franchise, not only in terms of visuals but also for controls and features.

There are still some significant additions and alterations to come in creating the Asphalt Legend. However, Asphalt 5 set a standard for all future racers to live up to. And that includes Asphalt 6: Adrenaline the following year - but more on that soon.