Changes came thick and fast for the franchise with this latest iteration. Gameplay advancements came thanks to a revamped physics engine which allows Airborne to lean even more heavily on its arcade roots, with dynamic stunts and calamitous crashes. Players can flat-spin and barrel-roll their way through each environment's tracks as they speed towards the finish. 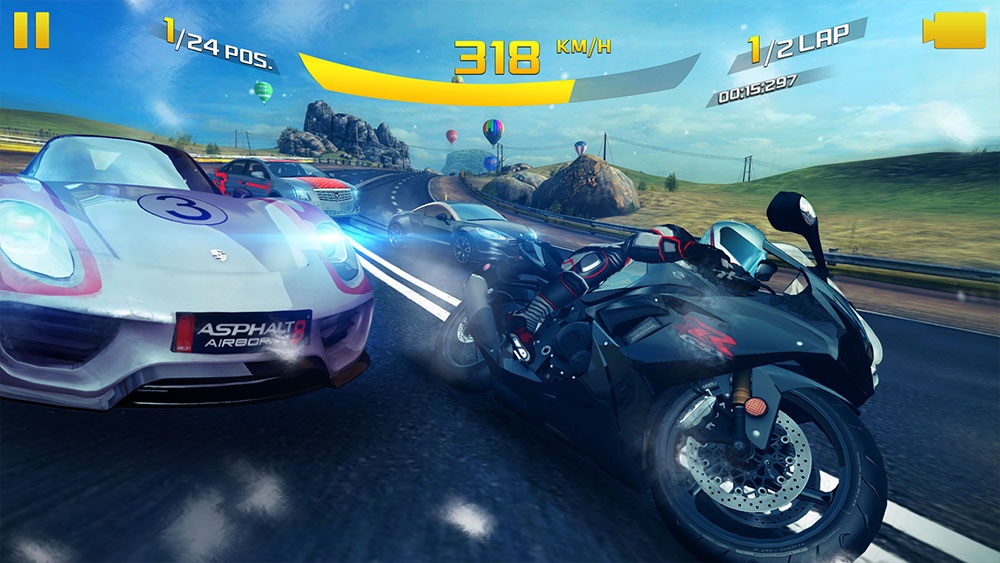 Performing these flashy gravity-defying tricks only accentuates Asphalt 8: Airborne's thrilling track design. Speeding through each exotic location from around the globe, it quickly becomes clear that they are custom built for dramatic competition. Even locales returning from previous games have been totally recreated to ensure they offer the optimum racing experience in this world of verticality.

A Wider World of Racing

Racers can test their skills in this growing range of locations. There are currently 18 of these, including Venice, French Guiana, Iceland, the Nevada Desert, Rio, and the Great Wall - with more on the way. Each offers unique challenges. Not only do you have to find the best racing line and discover the best route, you also have to make use of jumps and avoid obstacles. Some ramps certainly lead to a faster time, but approach them too slowly and you could find yourself with the new job of crash test dummy.

To accompany their unique topography, each location also presents players with a distinct look. Improvements to Asphalt 8's visuals over previous installments allow these differences to be even more pronounced. Speeding down tracks, you must contend with a range of surfaces and a variety of debris, from powdered snow in Iceland to sand and dust in Nevada. This is accompanied by destructible obstacles to smash your way through. There are even fog and motion blur effects to allow for a greater sense of place as you shoot around the tracks. 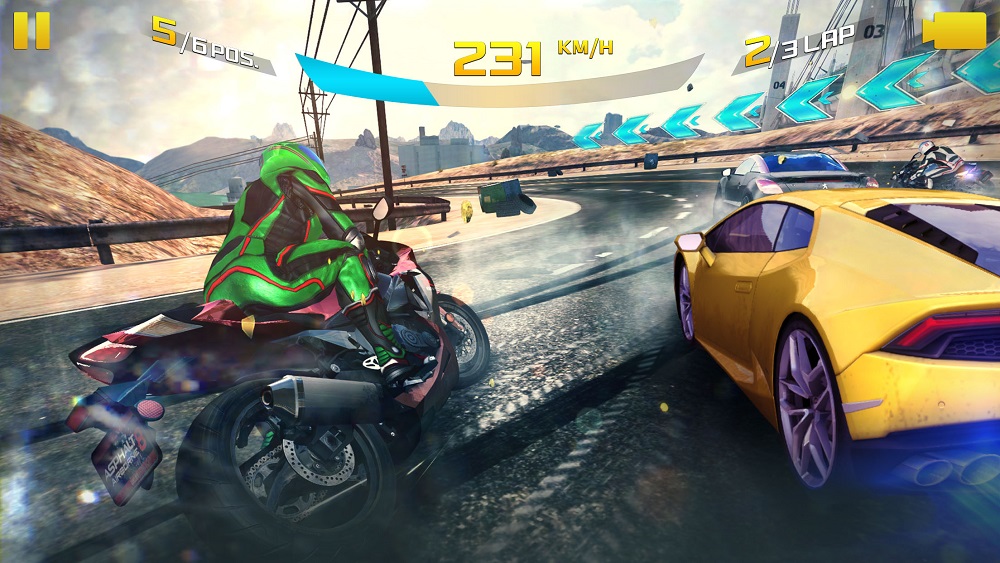 The blend of all of these stunning effects makes every track and location a thrill to race around as you search out the different routes and shortcuts.

A Full Selection of Dream Cars

To really take to the skies, you need cars with the speed to catch some real air. That’s why Asphalt 8: Airborne released with 47 luxury cars - all of which could be tuned in your garage. This initial line-up featured brand new machines, previously unseen in the series, including the Lamborghini Veneno, Bugatti Veyron, Ferrari FXX Evoluzione, and the Chevrolet Corvette C7. These all look incredible to this day, featuring a high level of detail and realistic reflections of the world around them.

However - as was previously seen with the growing roster of tracks - the biggest revolution Asphalt 8 introduced to the series was its ability to expand. From the first update, the garage began to grow dramatically. First, more car models were added, then additional manufactures arrived, including the iconic German manufacturer Porsche. Even more recently, bikes returned to the series. This has resulted in the game’scurrent offering which exceeds 250 rides that you can use to challenge the game’s hundreds of events. 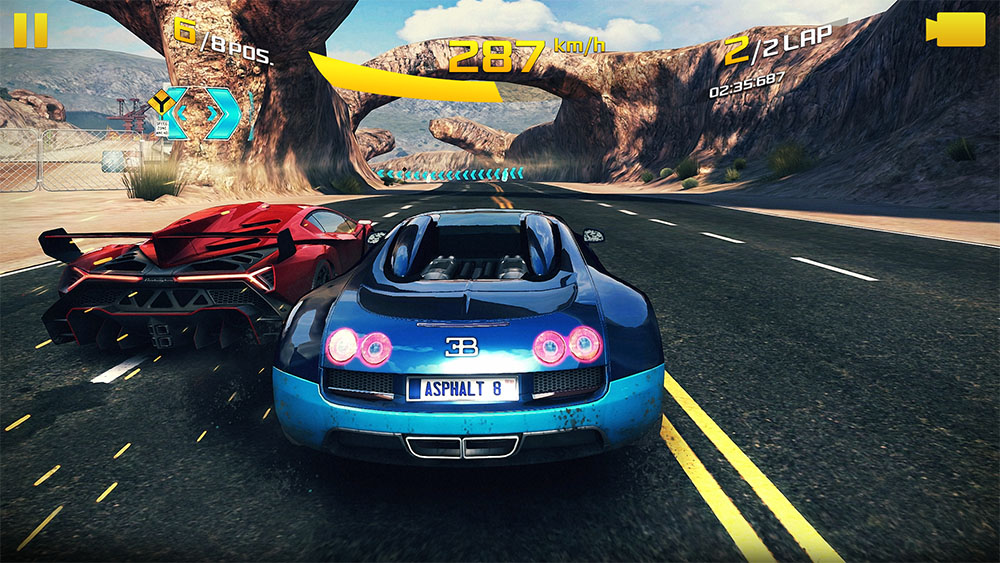 This expansion has been incredibly powerful for the series has allowed the game to continue to improve and grow for a full seven years. With the expanding selection of tracks, cars, and modes, the initial number of 180 events exploded. This has resulted in the sheer volume of ways to enjoy Asphalt 8: Airborne exponentially!

Airborne launched with two new modes for the franchise, Gate Drift and Infected. The first of these is like a slalom. With only a limited time, you have to speed down the course through a series of gates. Each gate gets you a point, but only if you are drifting – ensuring that your line down the track becomes a frantic zigzag.

Infection offers an even more distinct racing experience. The goal is simple each the finish line. But the twist is that while racing, you can become infected if touched by an afflicted car. Cars' affected by this illness have their Nitro activated, shooting them forward. While this sounds like a bonus, it has some serious disadvantages – like causing you to wreck once a timer expires. Taking out, performing stunts, and collecting Nitro tanks is the only way to delay this impending doom. This forces you to prioritize these targets over a simple dash for the finish. 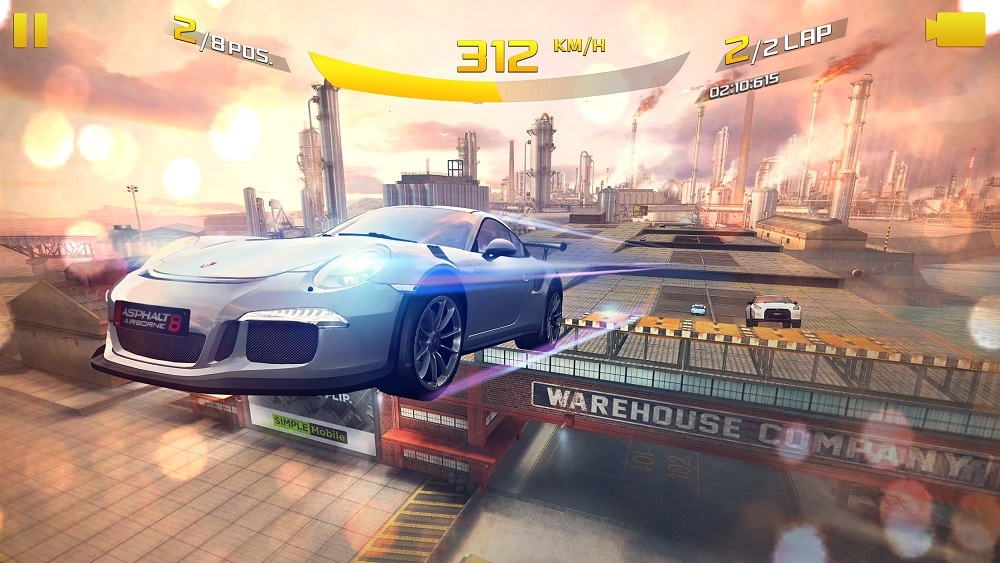 Multiplayer also received an upgrade. Whether you are racing eight other players in simultaneous, twelveplayer multiplayer (expanded from eight players at release), or daring your friends to beat your time in the asynchronous multiplayer, Airborne offers you the chance to prove yourself the ultimate speed demon.

Multiplayer has continued to expand throughout Asphalt 8’s life, and it now includes Leagues and Seasons. This provides the opportunity for racers to show off their skills, not only to their friends, but to a whole world of racers.

This combination of classic race types, fresh modes available at launch, and entirely new races that have been added over the last seven years (such as Tag Racing that has you swapping cars mid-lap), ensures that Asphalt 8: Airborne will always offer a huge amount of variety -a variety that players continue to enjoy to this day.

A New Level of Success

Asphalt 8: Airborne is the first of the series to really embrace the power of modern smartphones. It is this ability to constantly expand, improve, and react that has seen this arcade racer become so exceptional. These constant improvements have seen it remain securely atop the world of mobile driving games, with more than 450 MILLION downloads –winning the honorary distinction of “most downloaded mobile racing game on iOS, by all time worldwide.”

And still, both the audience and the game continue to grow, cementing it in history and our hearts. Become a part of this phenomenon now by downloading it for free on iOS, Android, and Windows. Or, if you're playing already, leap into the active and enthusiastic community on Facebook, Instagram, YouTube, and Twitter.