The evolution of anything comes in fits and starts. Sometimes it can be a crawl, but at other times, huge leaps can be made. And, while on a conceptual level, Asphalt 4: Elite Racing was "just" another step on the path to Asphalt 9: Legends, there was one notable milestone – the release of the iPhone. Apple’s first smartphone introduced new levels of power, visual fidelity, and interactivity. All of this allowed the team to begin creating what we now all think of as Asphalt.

Some nitro in our tank

Having a look back at our previous articles on Asphalt’s history, you could be forgiven for not recognizing the series. That stops at Asphalt 4: Elite Racing. While the game later came to the N-Gage and other mobile devices, it initially released on the original iPhone.

From top to bottom, Asphalt 4 was designed with the smartphone's feature set in mind. The team focused on squeezing everything it could from the hardware, which had made its debut just a year before. It looked incredible thanks to the original iPhone’s 320x480 screen that enabled a previously unseen level of fidelity – especially in combination with its ARM CPU and dedicated 3D GPU. 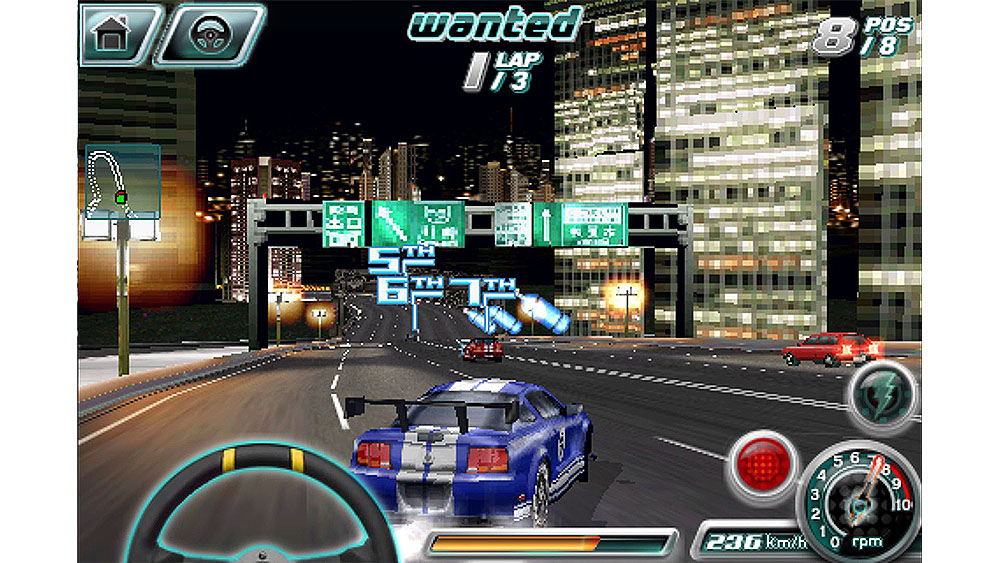 However, while graphical improvements no doubt excited series fans, these advancements were predictable. So, while Apple’s innovation encouraged a leap where previously only a step would have been expected, it was the addition of an entirely new control interface that really changed the Asphalt experience.

Between the iPhone's touchscreen and gyroscope, huge changes were able to be made. Firstly, and for longtime fans most notably, the gyroscope allowed for analog tilt control. Racers were no longer restricted to binary left and right inputs but were able to finesse their controls. This gave a more realistic driving experience and one that all players could understand.

Tilt a little left, and the car would gently move that way, while a hard jerk to the right would see your ride quickly lurch the other way. This also offered greater control during drifts so players could hold that sweet spot for longer. Kicking in the nitro was easy too as, with a single tilt back, this additional burst of speed could be activated.

Tilt was combined with touchscreen controls. While the multi-touch technology acted like digital buttons, it was easier for newcomers to understand. This combination broadened the appeal of Asphalt 4: Elite Racing, allowing car enthusiasts who may previously not have picked up the title to enjoy some high-speed racing action.

With one of the Asphalt franchise’s key focuses always having been to appeal to a broad range of car fans, the advent of iPhone – and smartphones in general – helped the team come even closer to its goal.

Emerging from the underground

As the iPhone highlighted the Asphalt series to many players, Asphalt 4: Elite Racing’s tone also moved the series from the shadows into the light on all of the devices it came to. While the game retained its street racing style, the theme shifted from underground to elite jet-setters. This moved the vibe from trying to rise through a criminal underworld– to being a street racing VIP. 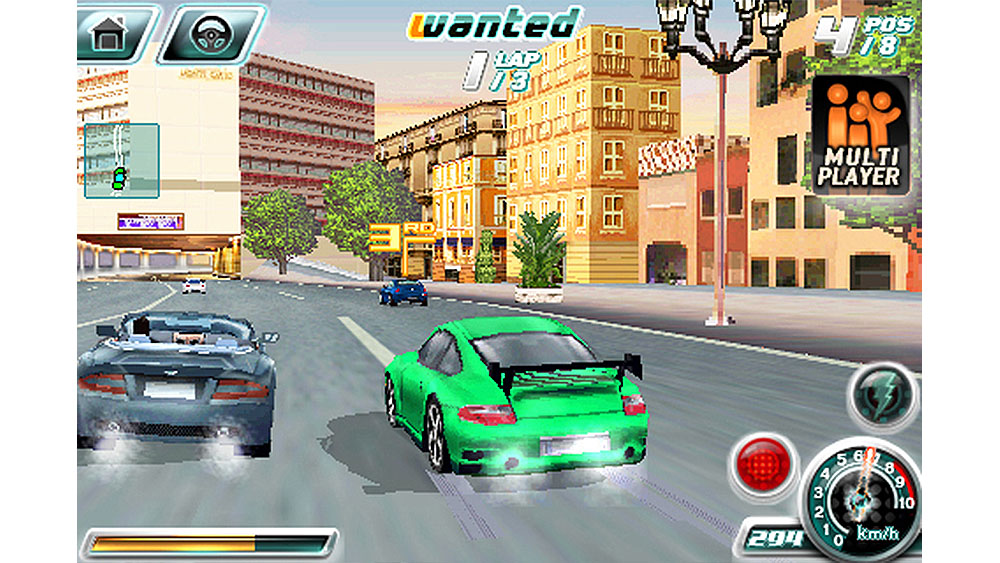 With the broader audience, this made more sense. Now players were celebrities. They got to live a fantasy of racing expensive cars in urban settings, instead of fighting their way to riches through illegal street races. It was a subtle, but important difference.

Sure, the police would still be on your tail in each city. And yes, they may have roadblocks and helicopters. But this felt like the cost of doing business rather than a legal threat.

With 28 licensed machines, Asphalt 4: Elite Racing portrayed a world of excess. You not only got to acquire luxury rides and improving their performance, you also got to admire them in your garage.

Plus, this setting provided more excuse for the globetrotting racing adventure that took players around the globe. Most versions of the game featured six countries to visit: Monte-Carlo, Beverly Hills, Shanghai, New York, Dubai, and Paris. However, iPhone owners could also hit to the streets of Las Vegas, Rome, Hawaii, St. Petersburg, Mumbai, and San Francisco. A total of 12 locations. 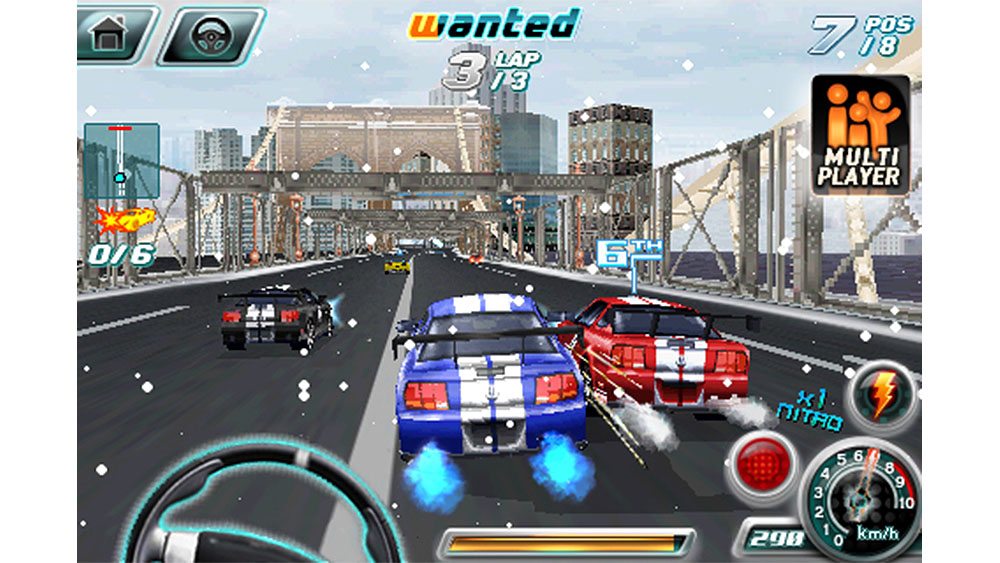 Each of the different racing environments looked fantastic and more distinct than ever. In modern cities brightly lit skyscrapers towered over racers, while old towns saw racers speeding over cobbled roads. And, of course, San Francisco was filled with breathtaking jumps. This diversity was further expanded by a weather mechanic that could alter cars handling mid-race.

To get the most out of these cars and locations, Asphalt 4 also offered more ways to enjoy its action. New AI and handling models ensured every race felt more real and dynamic than ever. You could experience all of this across five different game modes. Race, Duel, Cop Chase, Cash Attack, and Beat'em, all made their return from Asphalt 3, but all were rejuvenated by the fresh mechanics and visuals.

Another advancement for Asphalt 4: Elite Racing was easier access to head-to-head, PvP racing. Using Bluetooth it was a simple job of creating a game and waiting for a friend to join you. This allowed Asphalt racers to prove themselves face-to-face in real-time in thrilling competition.

As Asphalts’ first lap with an iPhone, Asphalt 4: Elite Racing was a huge success with both critics and fans. But, after this initial experience, the team were ready to make future releases even better. Next time we will check out Asphalt 5, and how the team continued to refine mobile gaming’s premier racer.